I believe origami is a vanguard art able not only to transform paper but mind, heart and hand as well. So as I transform paper, this process changes me and leaves a trace within me as much as in the paper. But the dialogue is never just the two of us. It includes the people and events that touched my soul and those I hope to move or inspire. There are many modern origami artists I draw my inspiration from, yet I shall sum up all that influence into one name that inspired us all: Akira Yoshizawa Sensei. 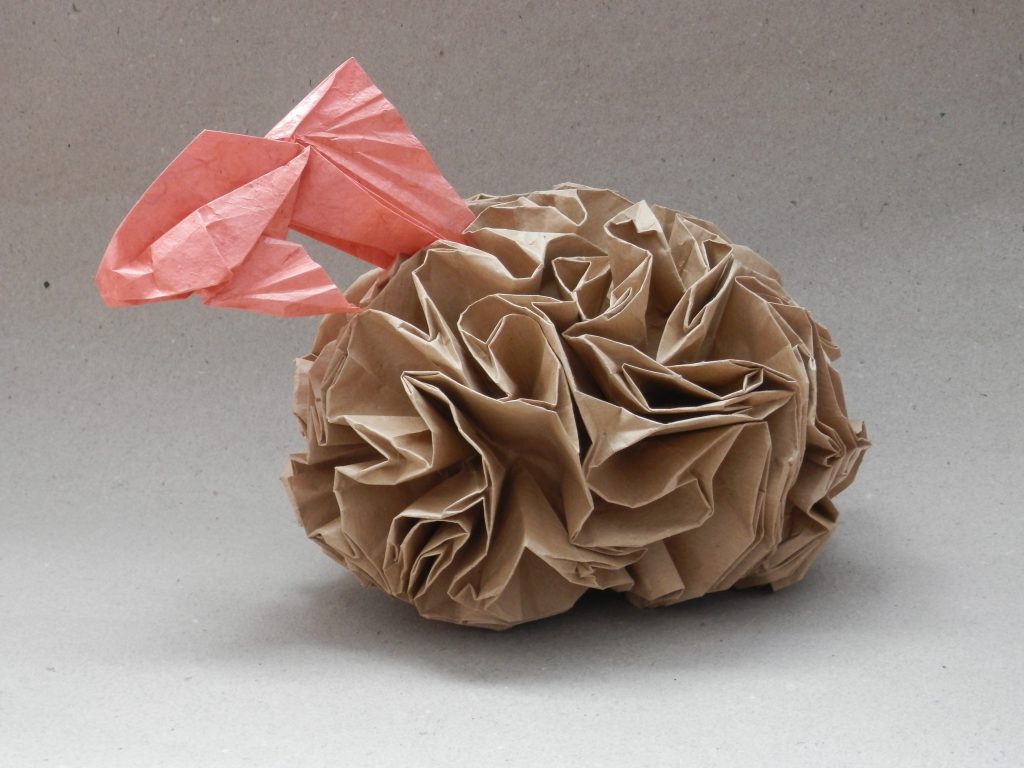 GOLDFISH AND CORAL 2014 Goldfish is folded from a square of glissine paper 9 x 9 cm and coral is a polygon tesselation of 70 x 70 cm kraft paper. 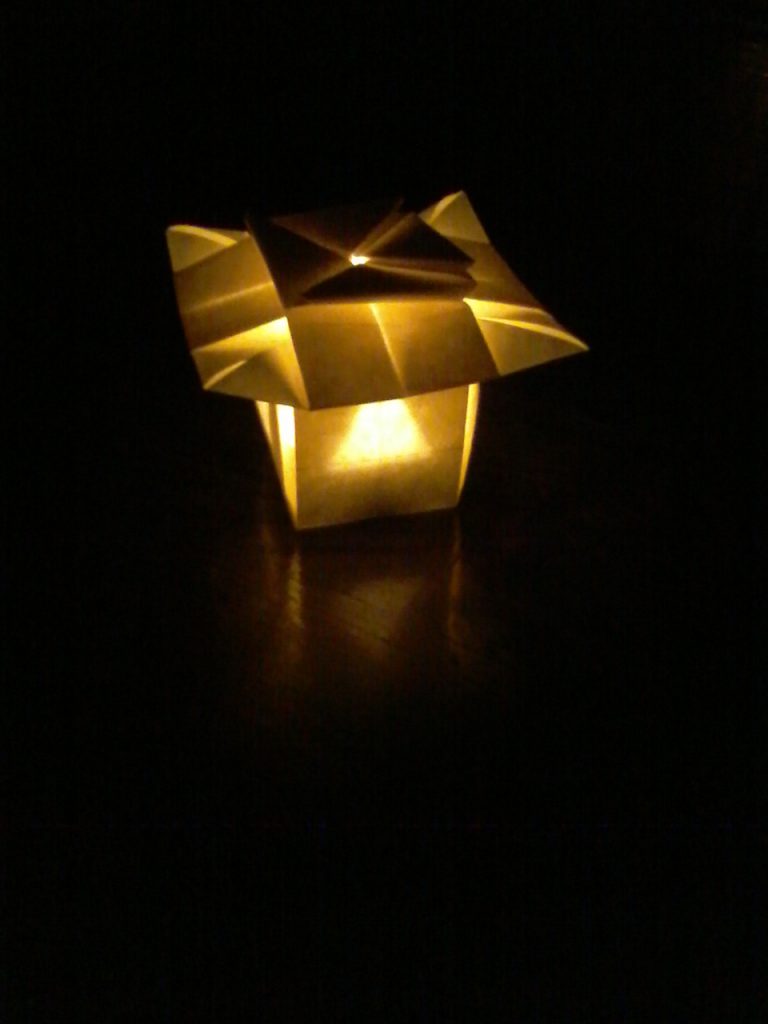 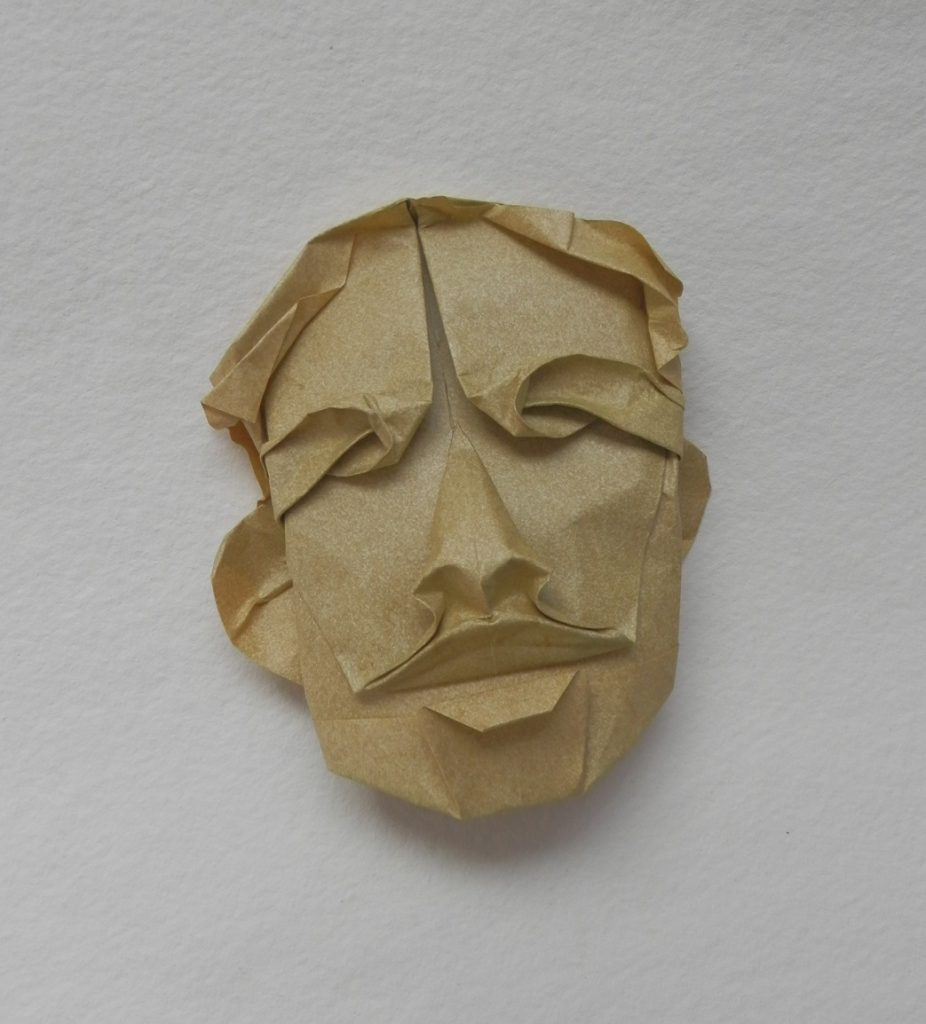 DREAMER MASK 2020 (Elephant Hide paper, 9 x 10 x 5 cm) The paper has the will of its own and listens only with one ear. Each time I set to fold this mask, a new face appears. Different paper, different moods, different days in the year, all make an impact. The effect is close to squashing paper - no two hands can make the same result. 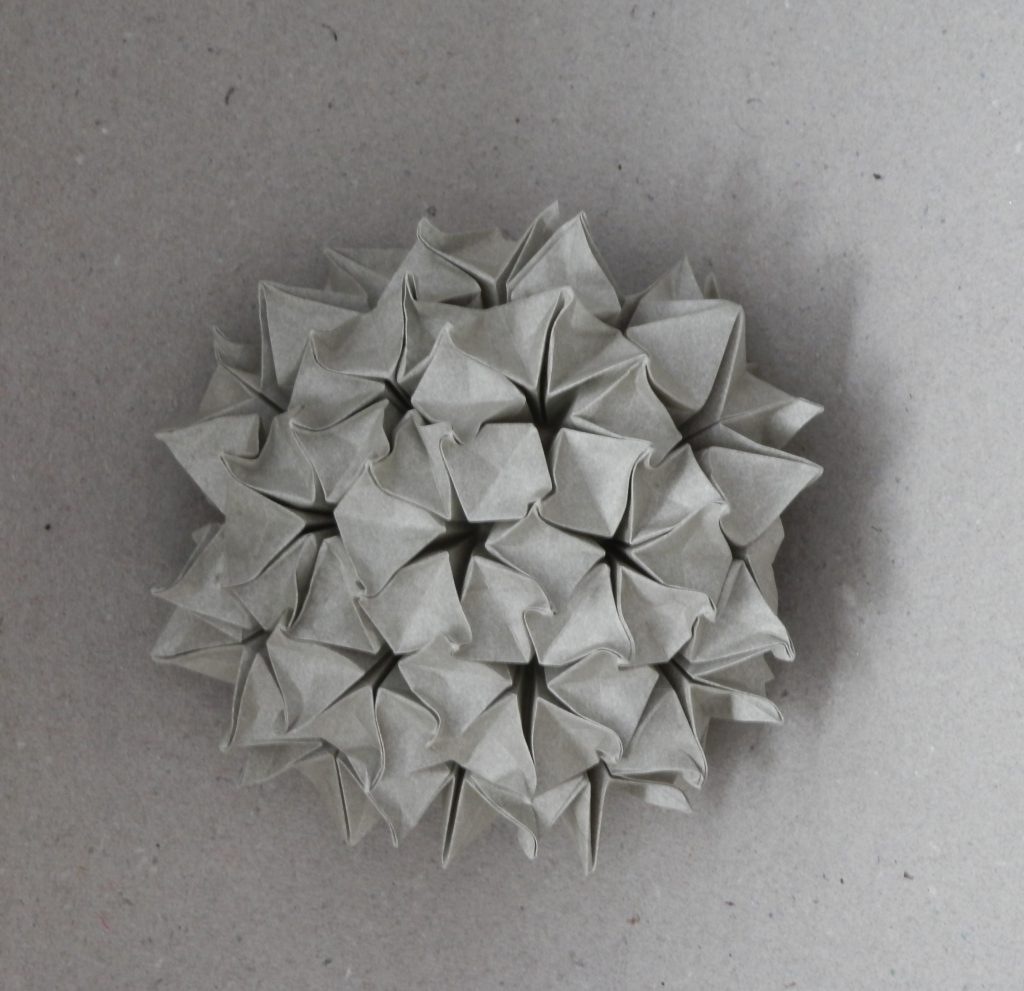 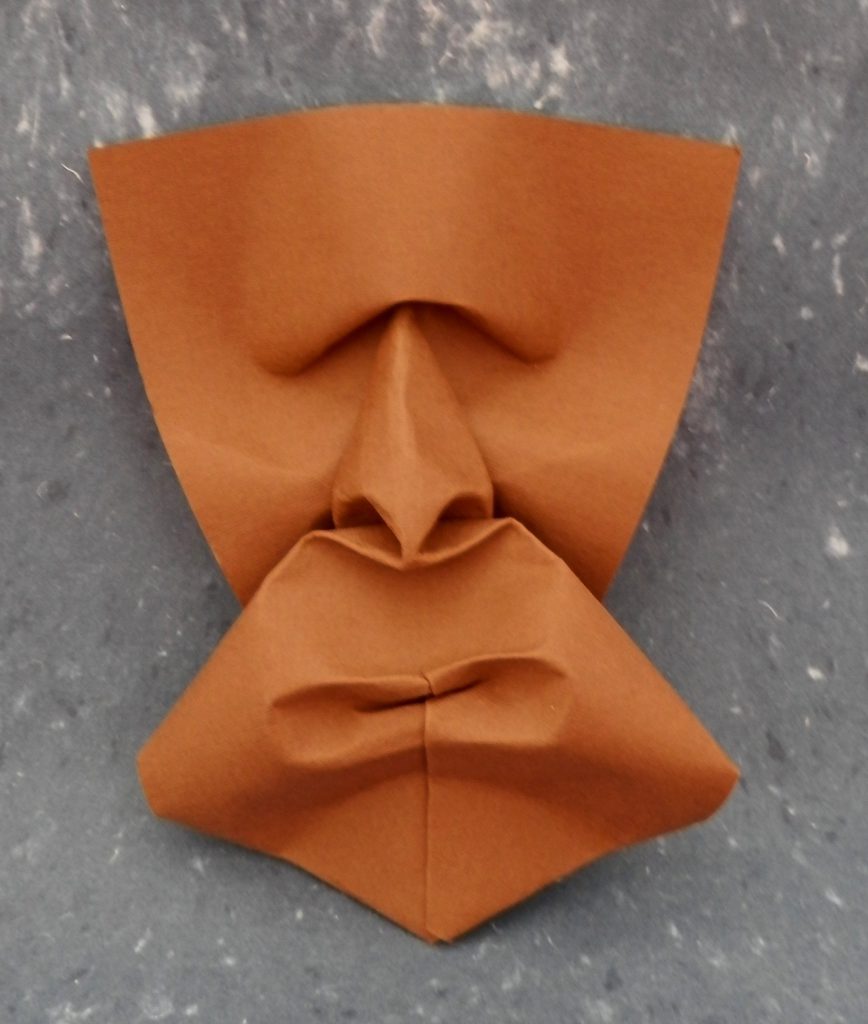 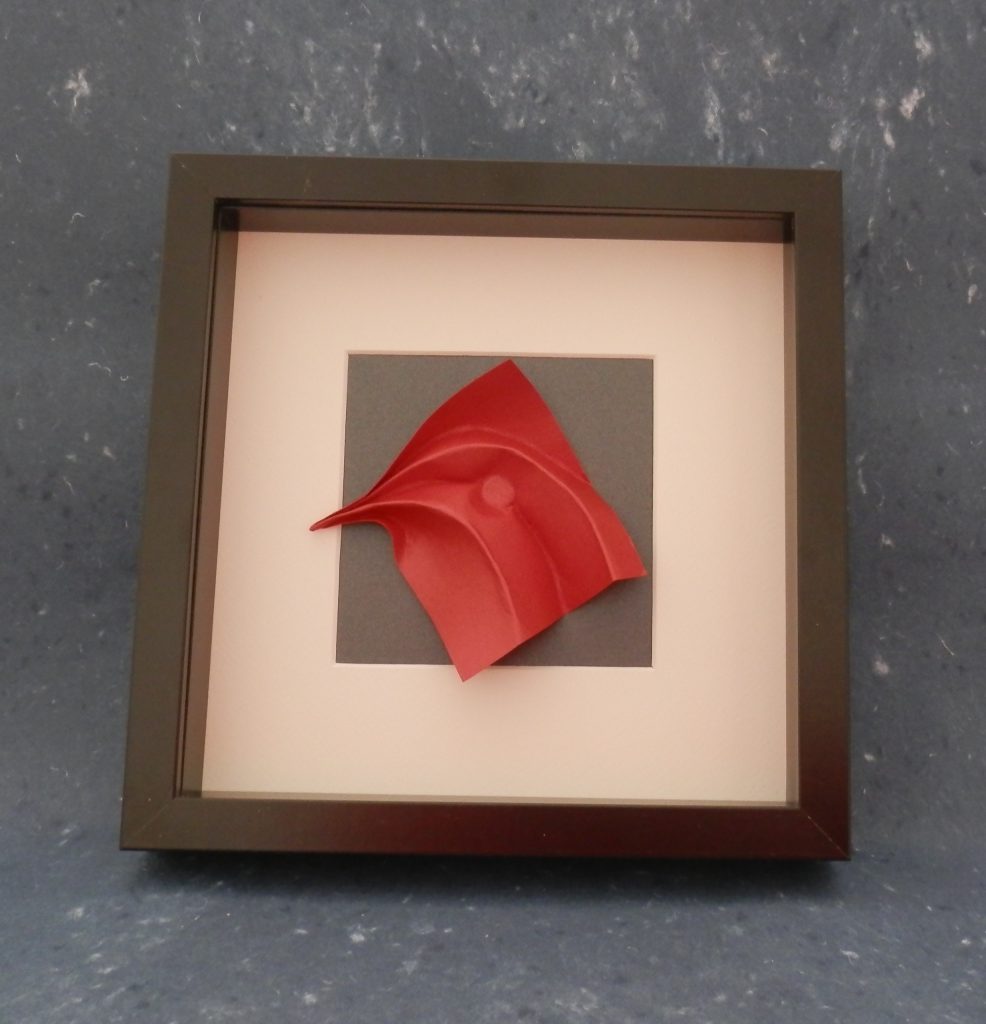 CHICK HEAD Wet folded red Stardream paper. Donated to Mujeres de Papel exhibition in EMOZ, Zaragoza, Spain 2016. I explore ideas in the process of folding paper. Movements in folds are my meditation. Color of paper often defines the mood of my conversation with paper. What you see is the result of it. 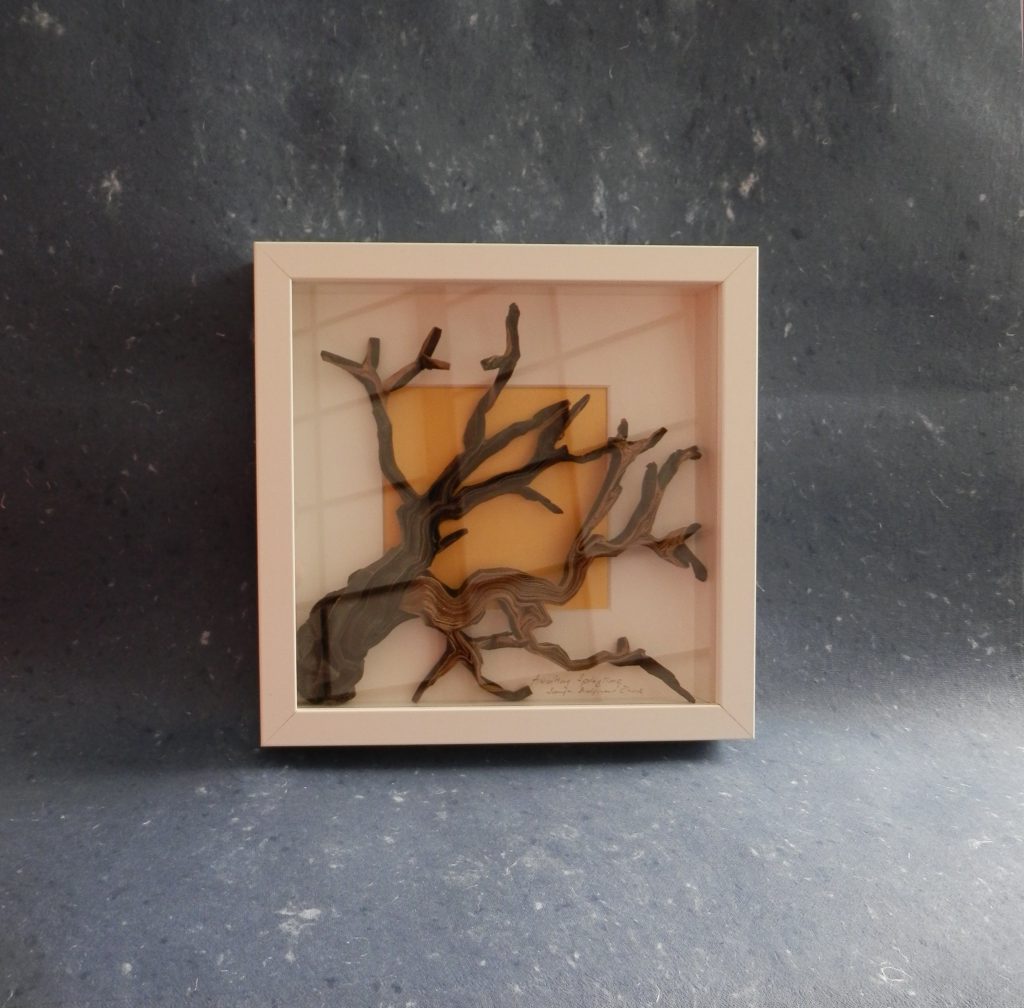 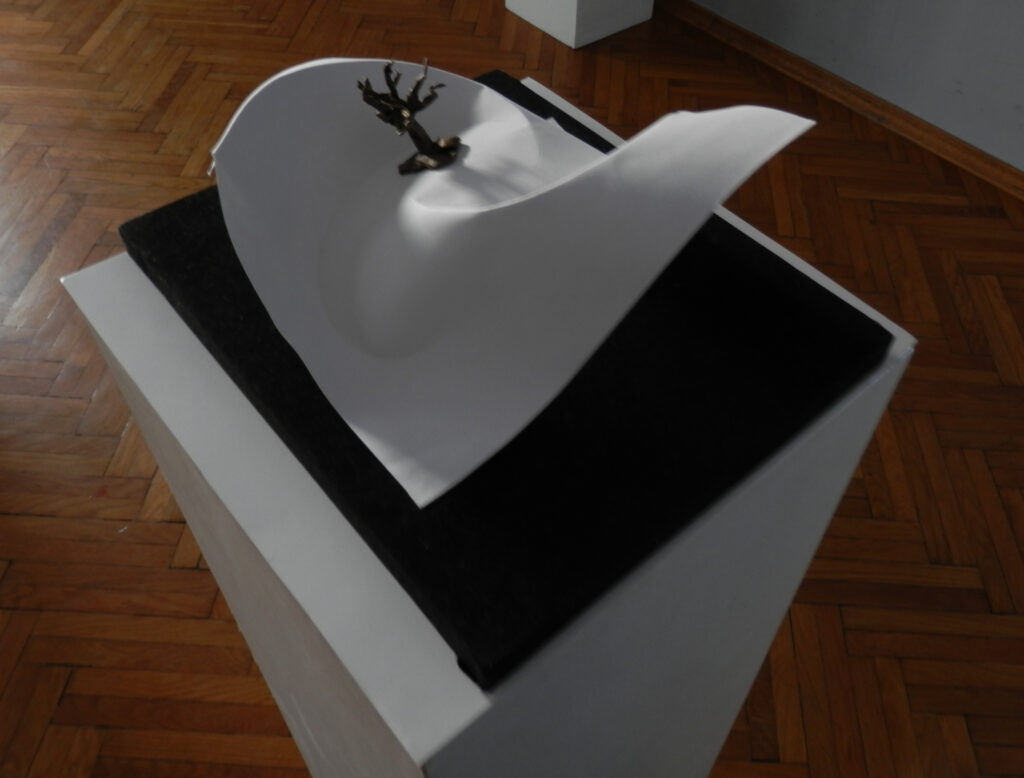 ORIGAMI HAIKU. Black and white | embracing | a tree in the snow 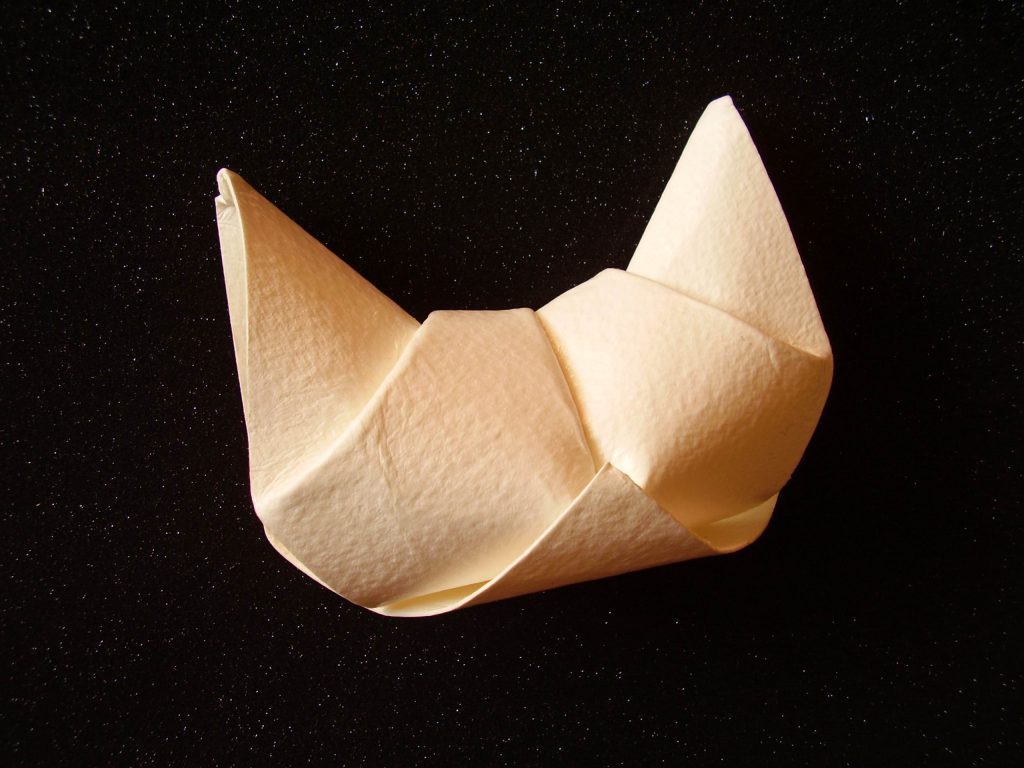 CROISSANT Created 2008, diagrammed 2020. 13 x 11 x 4.5 cm Wet folded from a square of Khadi paper 640gsm Created this croissant in the same year I curated the first origami art exhibition in Croatia. Its old site cannot be edited any more, so the link for downloading the presentation does not work. Instead, you can see the exhibition by clicking the buttons below: http://www.inet.hr/%7Esanjasrb/Exhibition.html 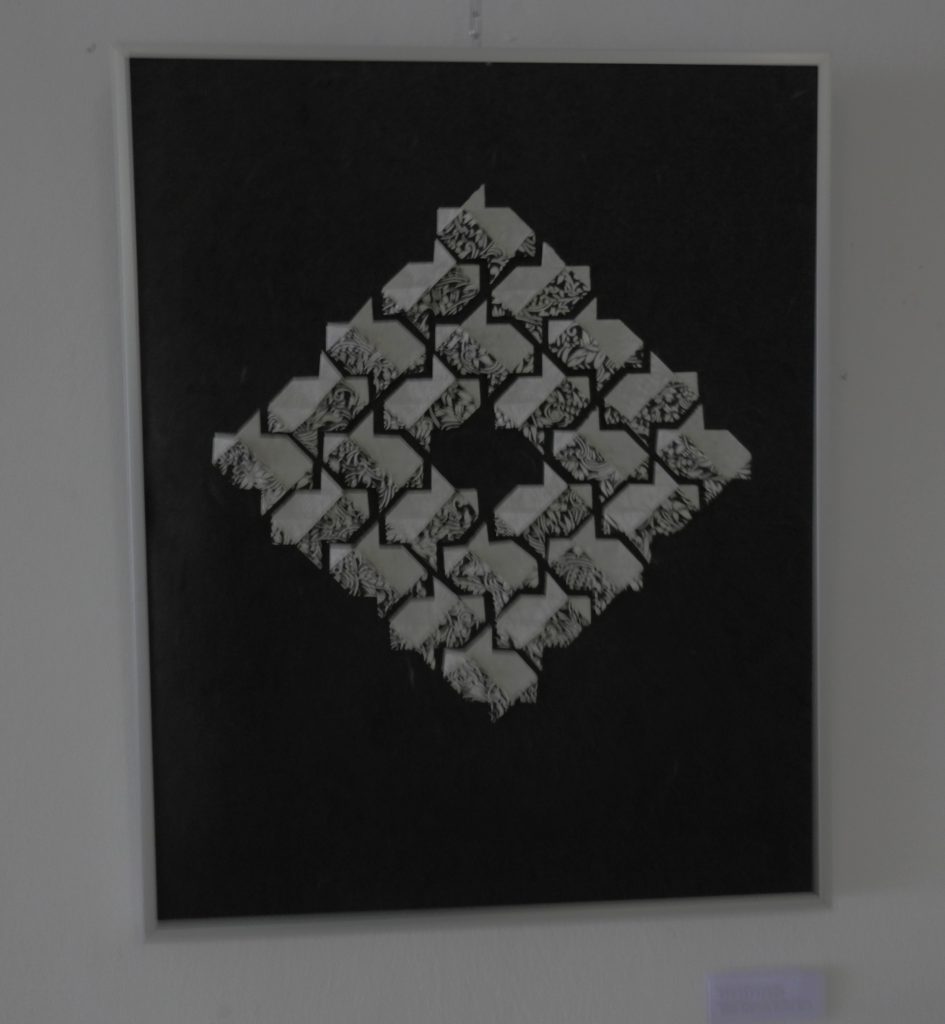 DOUBLE FISH TILES 2015 Each tile is an origami folded from a square of Japanese printed washi. Inspired by iso-area folding and M.C. Escher. If arranged between two glass sheets, the tiles would give the same effect at the front and at the back.

Sanja majored in English language and literature, learning German and Scandinavian languages as well.  Translating and teaching opened numerous new realms for her.  And the one pursued with most passion in the last two decades was paperfolding.  With the raise of the Internet, a new bright star rose on the horizon – the modern origami art.  It was a marvelous new language to learn, so Sanja tried various folding styles and techniques, eager to learn from the vanguard masters of the paper form.  Inspired by the Hangar-7 exhibition, Sanja set to organize the first Croatian origami art exhibition with international origami masters, aided by several renowned artists from BOS and OUSA.  After the Krapina City Gallery exhibition, her new challenge was to translate origami into worldviews of various people and professions.  This proved a great inspiration for her own origami creations and incited her blogging on Origami Art Novosti.  Her origami design was commissioned by a Zagreb city theater, design agency Bruketa&Žinić&Grey and Archaeological Museum Zadar.  Numerous workshops and exhibitions for the Japanese Embassy, Croatian cultural institutions and festivals helped in building Croatian Origami Society - HOD, the first origami society in the SE Europe.  Sanja is President of the HOD, a member of the BOS, the OUSA and the Community for Creators of Origami.  Exhibited at Croatian and international art shows such as NIA UK and EMOZ Zaragoza, Spain.  Her motto is "If I put love in what I do, it changes me and the person I give it to."