My name is Gerardo Gacharná Ramírez, I’m from Colombia. I mainly create a wide variety of practical models of intermediate complexity. Most have a traditional look, with not too many folds and clean surfaces, and are well-locked. They are folded from one or various squares and/or rectangles. They may also combine non-foldable-materials to improve their performance.

Creating them has allowed me to play with my identity, granting me some sense within the world. It lets me simultaneously express my creativity and intellect. I moved from boxes and envelopes to other practical models. By creating envelopes and boxes I communicated my feelings to the gift-receiver and honored the ritual of gift-giving. But I make practical origami in general because it makes me feel empowered and amazed, fewer origamists prefer it over purely aesthetic origami, its utility is more explicit, and I’m fascinated about people/tools interactions. Designing useful models comes from the desire of making objects that interact with our routines; it’s craftsmanship.

Usually something in my life makes me design a model. That necessity is important in my creative process. Then, I sometimes conjure a basic idea. And I finally create the model through trial and error.

If you wish to contact me, you can send a message to gerardo(a)neorigami.com.

It's an interactive piece. Just like with "Curved Box with Blades", I'm atracted by its simplicity but especially by its ephemerality; in order to interact with the piece you must undo it completely, yet the origami is still there: between the creases and the curves of the unfolded paper. It's part of a centuries-old tradition of folding envelopes and letters in creative ways.

I felt challenged by my package design class to propose the easiest and biggest closed box I could conceive from a single small sheet. Just like with "Revealer Concealer", I'm seduced by its simplicity but particularly by its ephemerality; as you interact with the piece you must undo it completely, however the origami is still there: between the creases and the curves of the unfolded paper. It's part of a centuries-old tradition of creatively folding boxes. I wish to higlight its sturdiness combined with its delicate curves, which were possible thanks to the special features of the chosen material. 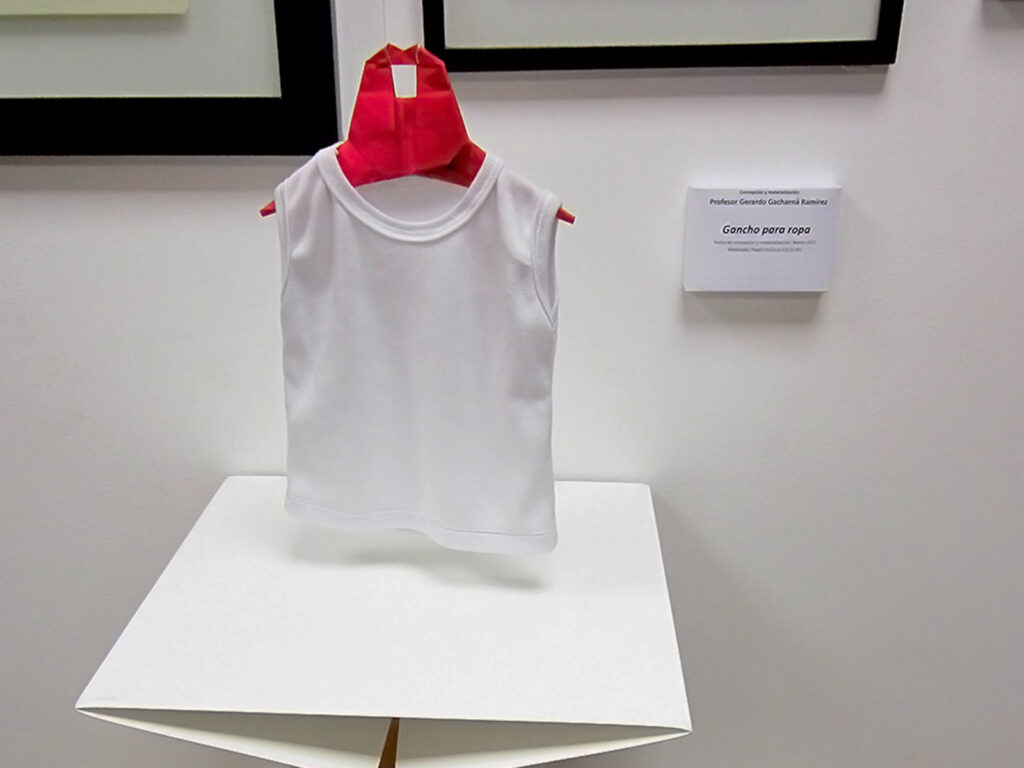 I came across a petition to create an origami coat hanger, at that time I was starting to expand my conception of practical origami, so I felt engaged almost immediately. Through "Coat Hanger" I wish to highlight the potential firmness of an otherwise flimsy material, aside from that, highlight the aesthetics of an everyday tool as it's reinterpreted through a new medium. The locking "hooks", at the top, later served as inspiration for the handles of "Shopping Bag". 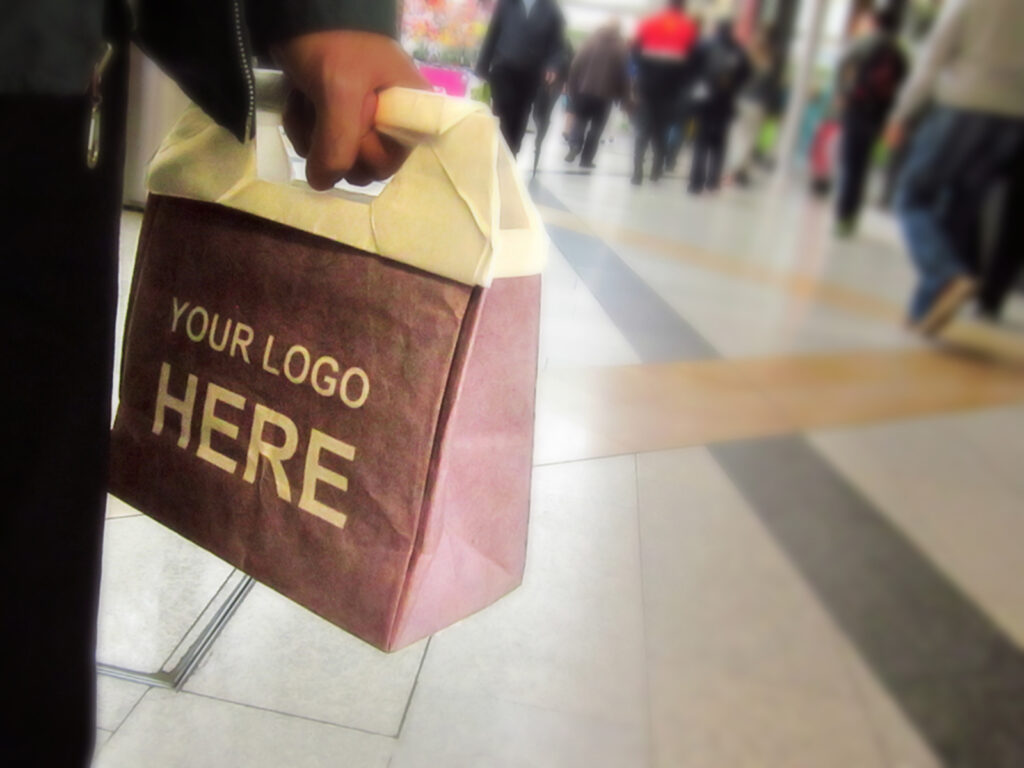 I had discovered Tyvek paper, a foldable synthetic material that's both waterproof and tear-resistant. Given the paper's properties, I felt the need of creating an origami shopping bag for my own use. Its creation process helped me comprehend what I now call the "frankensteinian method"; "Shopping bag" combines ideas from different origami designs: Jeremy Shafer's "Heavy Duty Box with Handles" as well as my "Coffee Table" and "Coat Hanger". It takes part of my exploration of unordinary practical origami. This one is a demonstration of the potential and limits of the paper, and also, a tribute to the aesthetics of the common shopping bag as it's reconceptualized through an unexpected medium. 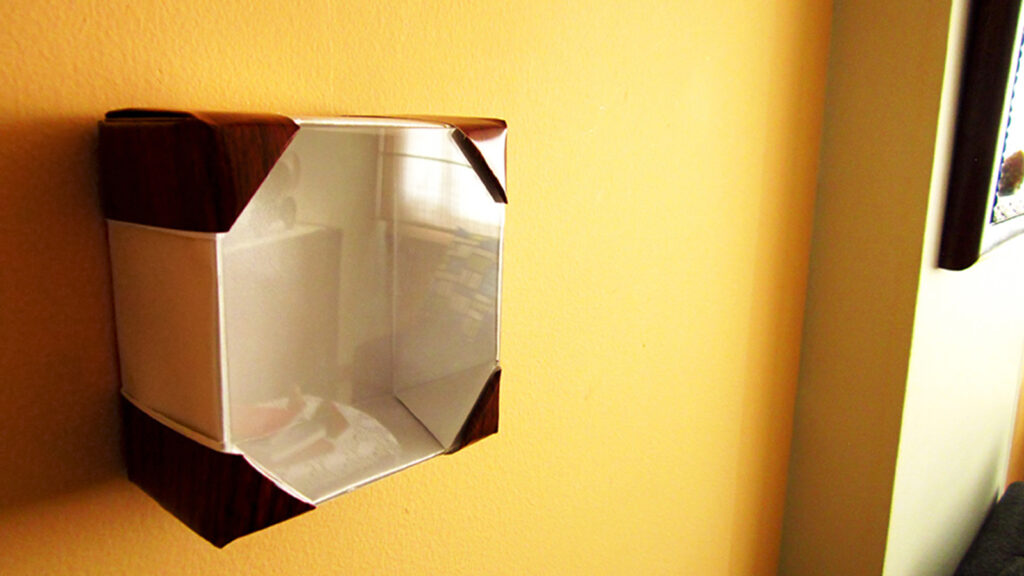 Origamist/painter/writer Leyla Torres made a card for our home. Wishing to exhibit it properly, I was engaged to create an origami shadow box. Just like other works of mine, it came to be as I explored unordinary practical origami. It has a paradoxical task: to highlight its content as art as "Shadow Box" blends in as its background. That was my motivation for the low-key colors. I propose the piece as a lens that can reveal the artistry of origami figures before people's eyes. 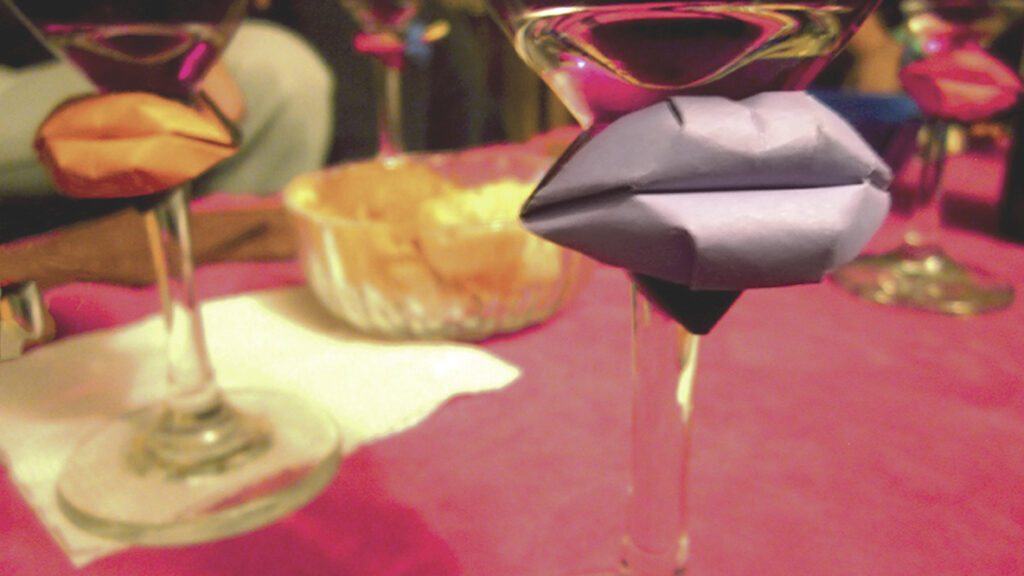 "Stemware Marker Lips" was the result of a mental excercise; I was determined to advance as much as I could in the development of a new piece of unordinary practical origami as I had a long walk. About the subject, I thought it was an interesting one as I had discovered the usefulness of glass markers in a recent ocassion. It was curious to add a figurative element with a practical intention; the lips represent "mischief" and "seduction", two features that perfectly complement some red wine for example. The contour makes this origami lips unique, and yet, they're almost the same as the rest of the set, for that's the destiny of glass markers. I have yet to concoct the ideal material for "Stemware Marker Lips". 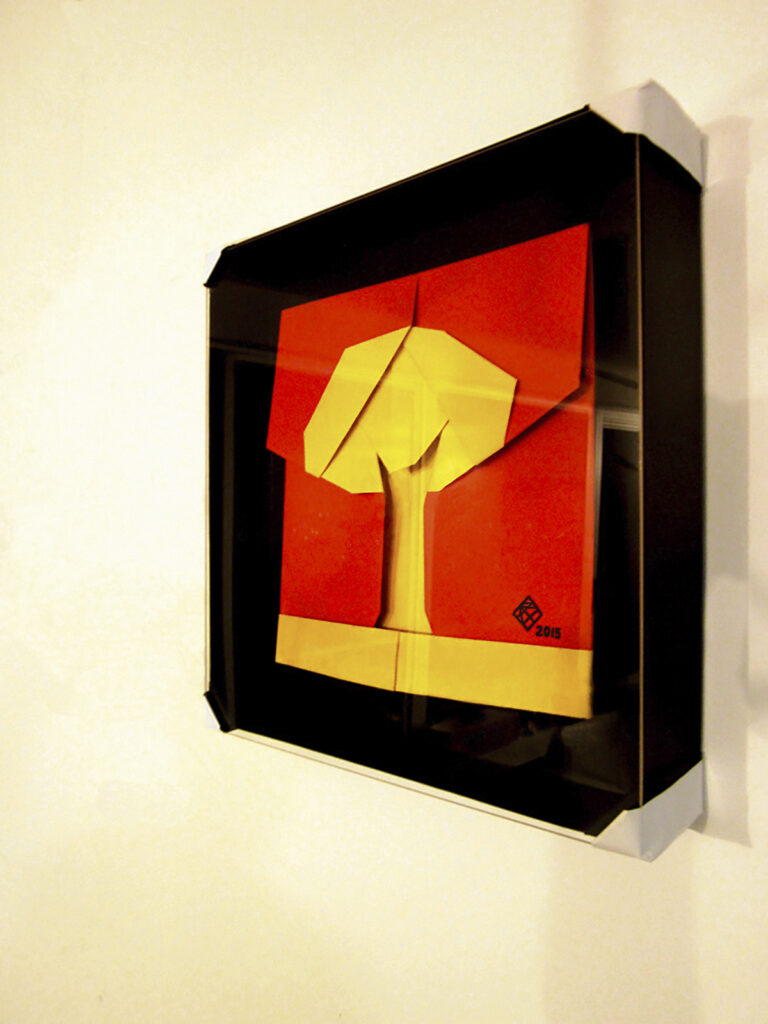 It was one of my first explorations of the mainstream conception of art through origami, hence the natural theme. In this picture there’s no subject surrounded by an empty space, which is very common in pictorial origami. Instead, there’s the ground and the sky, and a tree linking them both; it’s the simplest of landscapes. The lights and shadows cast over the trunk gives the tree a three-dimensional illusion. Also, the irrational colors invite the observer to meet “Landscape” with new eyes. 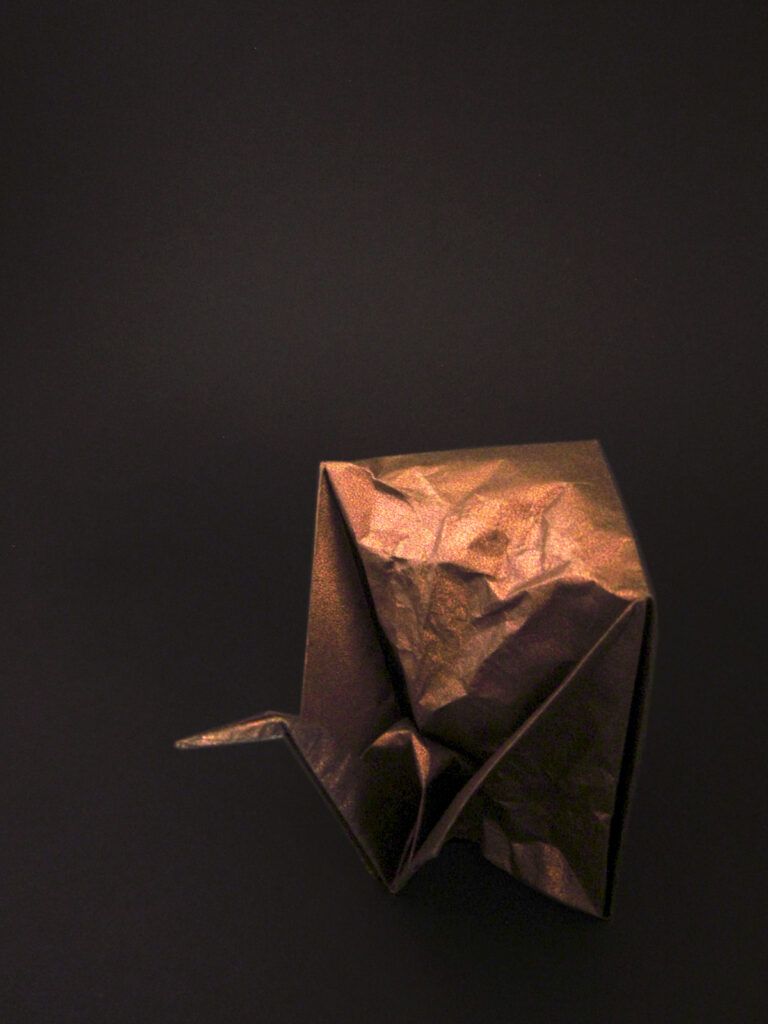 I took part of a creative challenge. The participants were to make a totally original origami figure that best referenced “art” beyond the boundaries of origami itself. “Sculpting a Crane” is a tribute to visual arts in general and stone carving in particular. Like “Landscape”, it came from exploring the mainstream conception of art. The piece depicts an instance of a work in progress. I especially took pleasure from crumpling a section of the paper for aesthetic reasons. As the observer interprets the piece, I wish for that person to take notice of the transformative state of the block and the crane. Another thing to consider is the contrast between the heavy and stiff block and the light and free-moving bird. That relates to the piece’s unrealistic shape: the beak exceeds the limits of the theoretical prism. Another thing about the shape is how the crane is trying to reach the sky with its wings—an unusual pose for an origami crane. Finally, the observer should have in mind the origami crane’s symbolic reference to peace and to origami as a whole, as part of the interpretation of “Sculpting a Crane”.

Interactions between people and tools have fascinated Gerardo Gacharná. He tries to express that through many of his models. He has been particularly influenced by traditional origami. Although he usually folds paper, he has also experimented with media like metal, plastic, and fabric. Through his practical works, Mr. Gacharná wishes to spread origami within everyday life, explore its potential as a craft, and become an excellent origami artisan. In a different venue Gerardo has also started experimenting with themes through origami designs. With this, he wishes to exemplify its possibilities regarding substance and introduce himself into the arts.

Gerardo Gacharná was born in and lives in Bogotá, Colombia. He did not have any formal education in art or design, but he has taken independent classes in “product design”, “package design”, and “design with paper”. Mr. Gacharná edited the book “Practigami”, wrote the prologue of the Pajarita 2013 special issue, and published an article about the creation process of “Shopping Bag”. He was interviewed for the electronic fanzine Mini Neo; he is also a member of its staff. Besides that, he has given a lecture entitled “Creating through the Frankensteinian Method in Origami” for an international origami convention. Mr. Gacharná has participated in different amateur exhibits and has had solo exhibitions in two higher education institutions.

If you wish to contact Mr. Gacharná, you can send a message to him at gerardo(a)neorigami.com